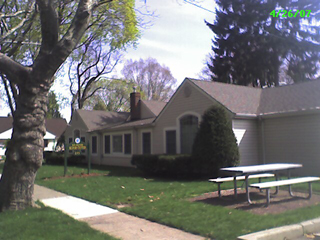 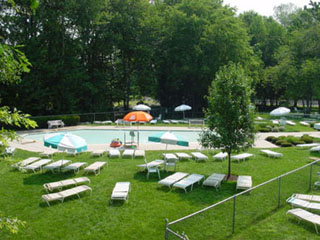 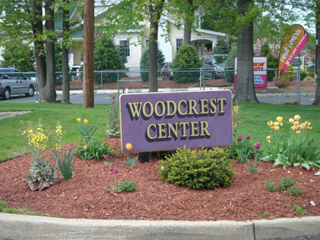 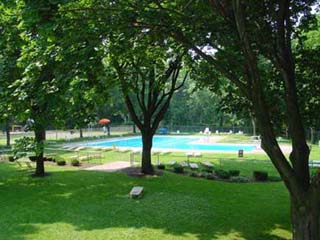 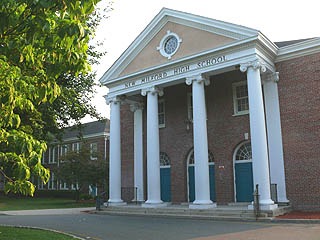 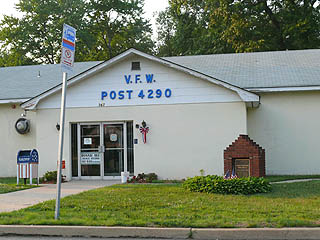 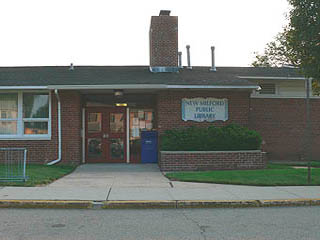 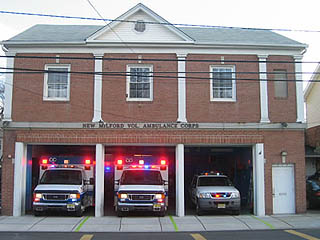 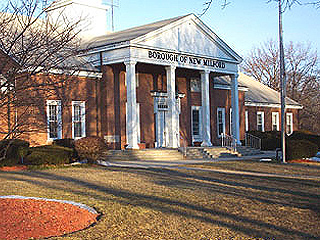 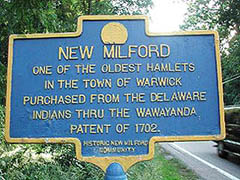 The story of New Milford has been one of the Demarests and the Van Buskirks. David Demarest arrived in New Milford via the Hackensack River, encountered the Lenni Lenape Indians, and bought 8000 acres of land from them on June 8, 1677. They were the only family permanently in what now is Bergen County.

Next to the Van Steuben House is a good example of early Dutch architecture (the Demarest House) and it formerly stood next to the French cemetary in New Milford. It was originally owned by a Demarest, and moved to its present site in 1955.

In 1681 New Milford was surveyed and was owned by four Demarests. In the 18th century New Milford was basically farmland. Demarest Crossing was an important trading center and “seaport”. River Road is probably one of the oldest streets in Bergen County and one of the least changed. It was probably an old trappers trail. The next oldest streets are Henley and New Bridge Road.

New Milford was then in a period of quiet growth and became one of the fattest, most comfortable, and envied areas of the colonies.

In the 1770's New Milford was proud of its farmland of rich soil. There were a few small clusters of homes, gristmills, a sawmill, two or three taverns, and a Latin school.

The colonies followed a degree of self-government which they learned back in England. New Milford provided many Justices and Freeholders to help the County, and also representatives in the Provincial Assembly. Justices of the Peace were main figures in local government, having administrative as well as judicial authority. They appointed tax collectors and tax assessors and seized properties of those who did not pay their taxes. They built jails and filled them. The Freeholders were elected to consult with justices, particularly in the matter of levying taxes for roads.

Wheat was their principal crop along with buckwheat and corn. Cabbage was grown for sauerkraut and as fodder for cattle and hogs. Wild hemp grew hardily in the woods and was used for rope, hats, baskets, mats, wall covering and roofing. Flax tobacco and watermelon also grew in hardy crops.

During the 1700's there was a strong slavery economy. In 1726 there were approximately 2000 whites and 500 blacks in Bergen County.

New Milford is rich with history of the revolution, including George Washington and the troops at the New Bridge Inn (built about 1739), which was the center of the action. Within New Milford there was also a civil war where families were split apart. The attitude was one of wishful hoping that the trouble would pass away without disturbing the serenity of the valley.

Throughout the war, New Milford continued to bear the brunt of attack due to the strategic nature of New Bridge. Control of the area volleyed back and forth until the end of the war.

In the 19th century life remained tranquil and predominantly farmland. The Hackensack River was used to distribute the produce downstream. Industry in the area began with the local blacksmiths. There were five from New Bridge to old New Milford streets.

In 1830 there was a pottery mill on the Hackensack River spawned by the rich red clay at the banks. A collection of the pottery is on display at the Van Steuben House.

Wampum was used for trade with the Indians and was made in the 1840's in New Milford by Mary Jane Bell, who specialized in making black wampum beads derived from ocean clamshells. White wampum was made from conch shells.

Amusements were simple during this time. Farmers were “early to bed, early to rise”, but an interest in politics remained lively, leading back to the early days of the revolution. Elections were held in rotations at Tenafly, Cresskill, Schraalenburg (Dumont and Bergenfield) and Peetsburgh (New Milford). Elections were considered holidays permitting the citizenry to travel afoot or by carriage to the polling places. Many neighborhood disputes arose.

The Hackensack River was a scene of continuous activity until the end of the 19th century. At that time the NJ and NY Railroads became the primary means of commercial transportation.

From the days of the Indians, the Hackensack River provided amateur fishing for locals. Commercial fishing followed with the introduction of the railroad.

During the Civil War years, prevailing opinion in New Jersey as a whole, and Bergen County in particular, was unsympathetic to the Union cause. The reason was that the inhabitants were still predominately of Dutch heritage. Their prime consideration was the orderly conduct of their farms, for which domestic peace was essential. During the Civil War many of these conservatives tried to maintain their orderly lives by staying neutral. In addition, slavery as an institution was dying out in New Jersey. Only slaves born prior to 1804 were legally owned and at the time of the Civil War the youngest slave had to be fifty-seven years old. The farm owners considered themselves kind masters and worked side by side in the fields with their slaves who enjoyed more freedom than that of slaves in the south.

Elsewhere in the State, men of different ancestry such as railroading and manufacturing shared the southern point of view of States Rights. A group of 939 volunteers made up the regiment from the agriculture population of Bergen County. Elections thereafter shifted frequently between parties. After the Battle of Bull Run in July 1861 peace meetings began to be held in Bergen County. The State and Bergen County in particular voted against Lincoln by large margins in both of his elections.

The Township of Palisades included New Milford, Dumont, Bergenfield, Cresskill, Tenafly and a part of both Demarest and Oradell.

Toward the end of the 19th Century inhabitants of many townships became dissatisfied with the management of their taxes and redistricting of schools. In 1893 school classes in New Milford were held in one room at the firehouse on Center Street in Peetzburg as it was called then. Pupils also attended school in Teaneck and Oradell. As a result a number of political subdivisions emerged.

The first to secede from Palisades Township was Tenafly in 1894, and Palisades no longer had its eastern boundaries on the Hudson River hence the historic name. By 1900, Bergenfield, Dumont and Cresskill, all dissatisfied with the larger township’s handling of local affairs, had broken away. All that remained of Palisades Township at that point was what we now know as New Milford.

At the close of the 19th century, the name New Milford had practically vanished on both sides of the Hackensack River. Not until voters from New Bridge, north to Oradell and east to Dumont and Bergenfield, combined to form a new Borough, was the old name reactivated by referendum.

On April 18, 1922 the Borough of New Milford was incorporated.